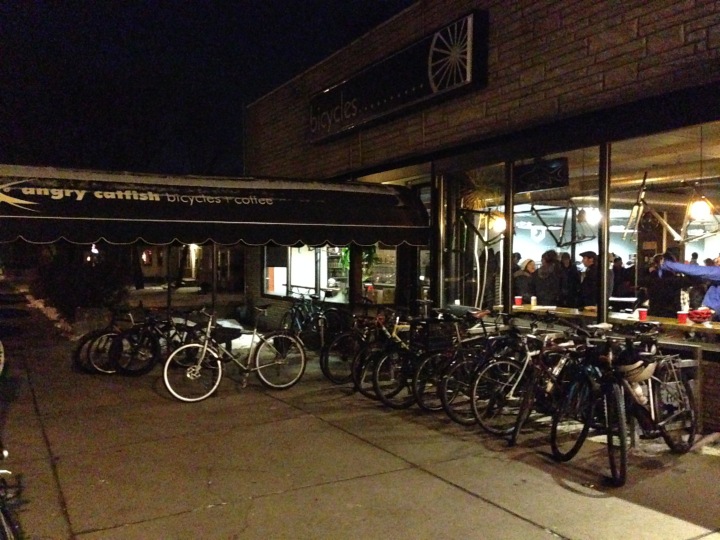 Just down the road from me in south Minneapolis is a bike shop called Angry Catfish. They’ve got a stellar stock of the finest local rides and a few from out of the state. As the sign says, they also serve coffee. It is amazing coffee. I sometimes find myself craving tea from the shop just so I can meander around the bicycles beautiful bicycles. It’s that kind of place. It smells good inside because of the coffee.

On this night, Angry Catfish was hosting an event called It’s All The River. A local musician named Ben Weaver pedaled his Salsa Vaya to New Orleans, riding along the Mississippi and experiencing the culture along the way. Dude has some stories. Lucas Winzenberg is a friend of mine who publishes a quarterly about bicycle touring. It is called Bunyan Velo. The night would be spent with Lucas talking to Ben about his ride, with some songs mixed in.

Welcoming Audra and I to the event was a platter of charcuterie and fresh bread on the shop counter. Next to it was cooler full of Lake Monster beer. My heart melted. This is a heavenly combination. If it were financially sustainable to live on beer and charcuterie, I would do it; cholesterol be damned.

Beautiful, isn’t it. The meat (and cutting board) are from Red Table Meat Co.

Lucas and I chatted before the start of the event. He was hoping to get enough people in to fill the seats. There were 40 chairs and a few couches and coffee tables sprinkled in for good measure. When the lights dimmed, more than 100 people were crammed into the bike shop. No idea what the fire code is for a shop of that size, but fuck it. We were there to drink beer, eat food and listen to bike stories and songs. Surely, this is an exception in any fire code. Why wouldn’t it be?

Ben would spend 15 minutes talking with Lucas, then play 15 minutes of songs. Repeat. Ben also had a few poems about his trip. His writing is descriptive and eloquent. I linked to his website in the first mention of his name above. Go there and listen to his songs. Or you can Google it just as easy. The Internet works both ways.

When things wrapped up, the crowd left entranced, dreaming about pedaling across the country. If the bike shop were selling bicycles that night (they weren’t), they would have sold a few–to me.

Forgive my shitty photo quality. I need to lug along my Canon next time I anticipate writing about something.