If this trip were a menu, I would order everything. But not that I need a menu to eat.

Angry Catfish is now our traditional starting point. They serve up stellar hot caffeinated beverages and sell pastries from Baker’s Wife, a bakery two stores down. Between the two is Buster’s on 28th, a bar that has an extensive tap list. We set off at 7:30 a.m. Legal bar serving time is 9:00 a.m. I calmed my sense of unfortunate timing with a sprinkled cake donut. 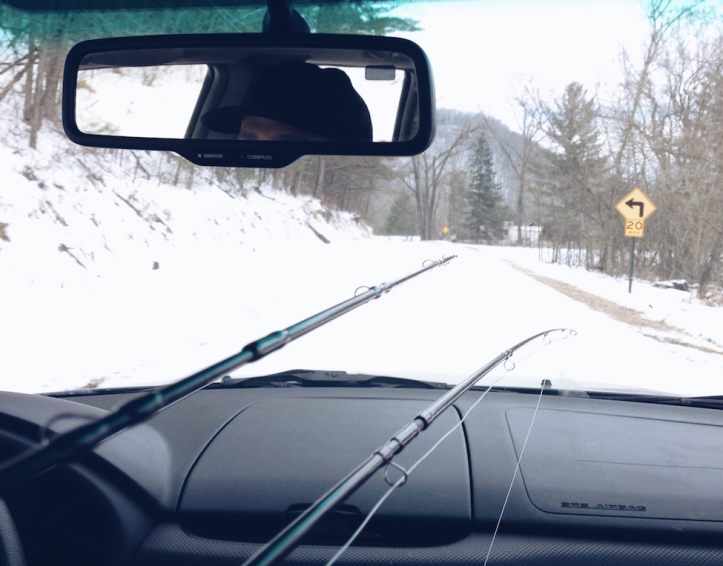 The morning was marked by a thick midge hatch. The sun was shining and temps were in the low 30s. We’ve been seeing midges emerge all winter on warmer days. This was the first time they would actually land on you. I’d never been so happy to have a bug land on my neck. This had to be a good sign.

We spent the first four hours of the day exploring a stretch of water we hadn’t yet seen. The first half mile was slow, shallow water that wouldn’t hold fish even during spring floods. We’re talking sandy bottoms, no features and water that struggled to top my boots. I worked the first deep-ish spot I found with some faster water. Nothing. Phil caught up after a half hour and we explored beyond a bend. This part of the river was marked with holes and downed trees. Each tree marked a hole 4′-6′ deep. You could approach these holes in one of two ways: Fish aggressively and risk snagging on root snarls or fish conservatively and risk being out of range for any sitting trout. I fished as close to the unwelcoming root arms as possible. Still nothing. I repeated this for a couple holes. Some were unfishable because roots covered the holes like an umbrella. Time for lunch.

We ended up covering two miles of water in four hours. When you’re carrying gear, wearing waders and layered winter clothing, trudging through snow and dodging boulders, you work up an appetite. Phil brought along some brats; I brought the beers. We headed into Whitewater State Park to pick up a bundle of firewood and use a fire pit. Thirty minutes later, I was happy.

Menu item 3: One bag of Cheetos (not pictured).

Menu item 4: Deschutes Cutthroat Porter (also not pictured because it was consumed too quickly). 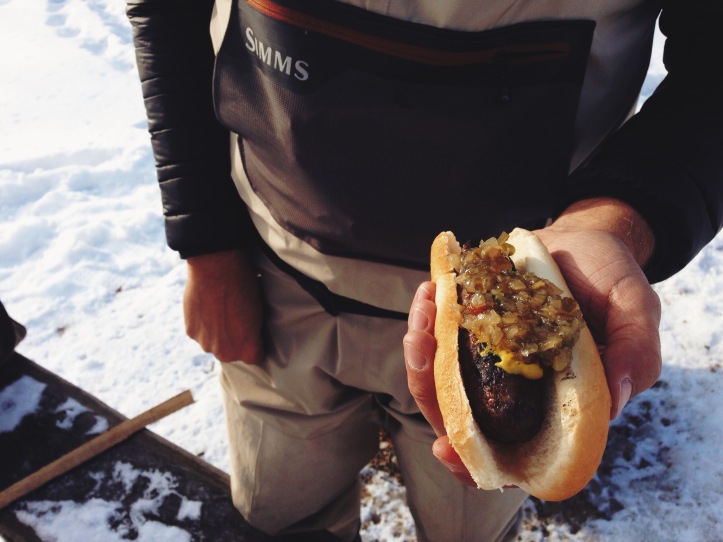 Our morning skunk pushed us toward seeking water we knew held fish. There is a spot in the park that requires one mile of hiking. A few good spots can be found along the way, but they are sparse. When we visited this area two weeks prior, the river was iced over. To our relief, there was only ice near the banks in the fast spots and just a bit more in the slower areas. Coyote and beaver tracks lined the river. You can identify a beaver track in the snow because of the paddle tail. Though industrious, beavers don’t know how to hold up their tails when they walk. We also came across a set of canine prints in the snow that were bigger than anything I’ve seen. Wolves are not native to this part of Minnesota. It wouldn’t have been a stretch to spot one in 1800, but their range is much smaller these days. The tracks had to have belonged to the biggest fucking pet dog on the planet. Had to. 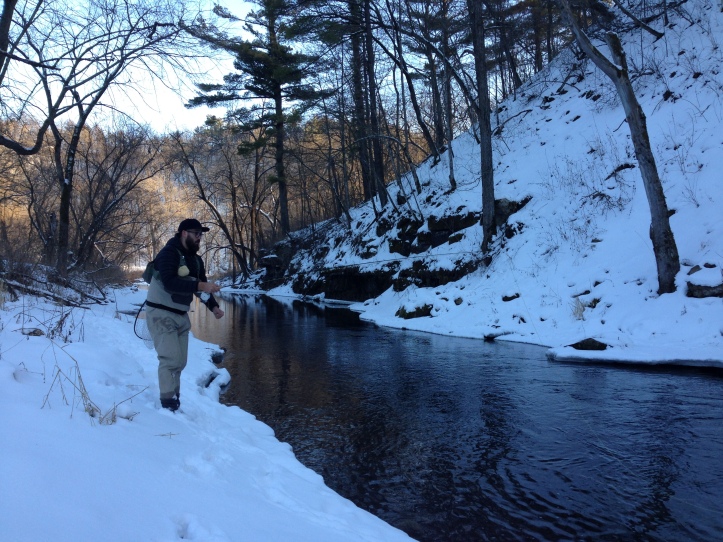 We stopped at a spot we’d only ever passed previously. Might as well test it out. Phil pulled out a small brown with a gimpy dorsal. Think high school years of “Finding Nemo” when he is finally out on his own, maybe seeing female clownfish in other anemones. By now, he uses his fin to his advantage and the other fish have a “he’s seen some shit” respect for him. That was how this brown was. Pixar, feel free to use this brief storyline. We fished a couple other spots, but came up dry. This winter slowness has evidently continued.

The best part of fly fishing is being in nature. I spend so much time outdoors because there is so much to see. Every time you spend time in nature, you see something you’ve never seen before. This time it was Minnesota’s version of alpenglow. We have only one mountain in our state. To be considered a mountain, a peak needs to rise 2,000 feet. We have that near Lutsen. One lonely mountain. There are no mountains in bluff country. As I rounded a bend, the sun was illuminating a bluff up the river. It was as close as this state can come to alpenglow and it was that one thing I’d never seen before. John Muir said “In every walk in Nature, one receives more than he seeks.” That brilliant, pioneering environmentalist was right.