I’d been gearing up for this ride since last year when a buddy made it his first century. Having just upgraded my road bike at the time of the 2014 ride, I was up for anything involving many, many miles. A brewery was the host of the event. Not much more convincing was needed. 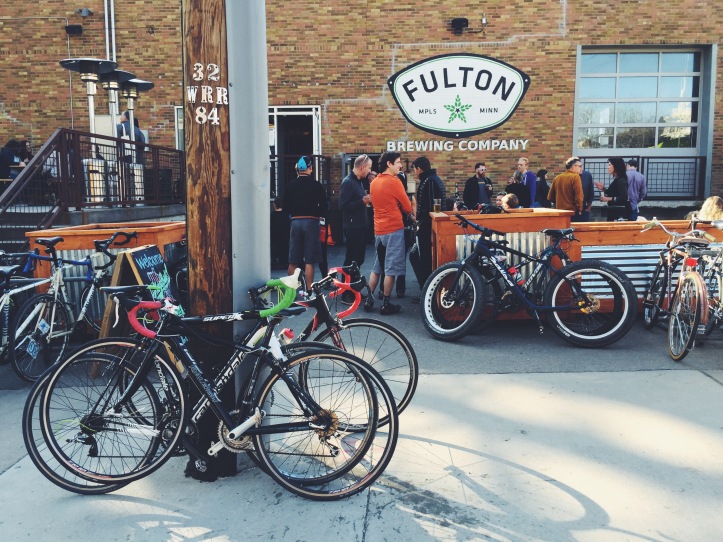 Friday evening was when Pete, Casey and I decided on heading to the brewery to pick up our race packets. With an expected field of 1,400, we didn’t want to wait until the morning before the ride and deal with other procrastinators. While I’m not one to do anything before it absolutely *needs* to be done, I’ll do anything to avoid a crowd. Biking to the brewery after work Friday also meant having a beer or two on the patio. Again, not much more convincing was needed.

The 2014 event had 600 riders. When everyone starts the ride at the same time, it can be a clusterfuck. This year’s field more than doubled that of last year. Put 1,400 people in one place, and it is crowded. Give everyone a bike, and you can’t move. With that, our small group of four riders decided to forego the mass start and meet the field a few miles into the course. Pizza Luce in Hopkins was our planned starting place. It was about seven miles into the course. Though this decision didn’t involve beer as a bonus, not much more convincing was needed.

Our plan worked well. Rather than driving my bike to the brewery, Joe and I met at Pete’s, then biked to Luce. After talking to a few guys later in the day, missing the brewery start might have been the best decision we made. The official ride start time was 9:00 a.m. We met at Luce at 9:10, then left from there at 9:20. We estimated the main field to be three miles back from us. It is worth noting that this was a ride, not a race, so starting time and location are not important. It was all about fun for us.

A pyramid appeared at mile 27. It was surrounded by scorched earth. We assumed it was the set of a “Stargate” sequel. 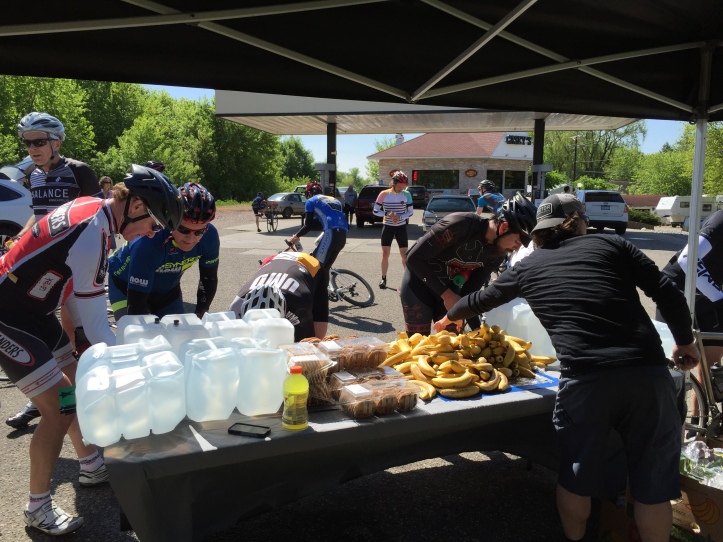 The first 30 miles were great. Wind was at our backs and the sun was quickly warming the day. The first rest stop was at a Casey’s (a different Casey) General Store in Carver, which is right on the Minnesota River. A Twin Six tent welcomed riders with bananas, water and granola bars. We weren’t at the rest stop for more than two minutes when we could hear the low hum of carbon wheels from behind the trees. Just then, $1M in bicycles and gear appeared at 30mph. Two of the riders stopped, 38 continued onward. My group was glad to allow them to pass us at a rest stop instead of on the course. We hung around for a few more minutes, then hit the road again.

Pete began singing Toto’s “Africa” at mile 38. I joined him at the chorus for backing vocals.

By this point, we cleared suburbia and river country and were rolling through farmland. With fewer trees, we lost our cover and the wind was stronger. It was easy to ride too fast with a stronger tailwind. I didn’t care to burn myself out early in the race. No sense in hating myself and rethinking my life at mile 70. We were sustaining 24 mph for a few miles on farm roads before realizing we were going to fast. Eighteen mph seemed like a smarter pace, so we took it down a few notches.

Casey waved at a farmer at mile 45. And another at mile 46. We then decided to create caseywavingatfarmers dot tumblr dot com. It doesn’t exist yet, but it will.

The second rest stop came at mile 60ish. I can’t remember the exact number. It was another gas station. The town was called Cologne and the course took us down main street. It looked like a town that has a killer summer parade. One bag of chips, a Larabar and half a bottle of water later, we were back on the road.

The course resembled a figure eight. It started at the brewery in NE Minneapolis, traveled to north of Belle Plain, then back to NE, crossing itself at miles 20 and 80. The smart cyclists turned back at the crossing at mile 20 to make it a 40-mile day and get back to beer and food trucks before crowds formed. It really was a beautiful course.

Not long after the second stop, I bonked. It forced me to drop back from my group by a half mile to eat something and get my legs back up to speed. A few miles later, I was feeling (almost) fresh and was able to catch up with the guys. This ended up being the toughest spot in the course for all of us. We were riding into the wind with a high sun over rolling hills and cow shit lingering in the air. Each of us pushed through something.

By mile 70, Casey had waved at too many farmers to count.

Our final rest stop was in the town of Excelsior on Lake Minnetonka. We took our time at this one and enjoyed all of the calories and water we could. This was around mile 80. A warm patio on the south side of the building proved difficult to leave. I might still be there, had I not had the willpower to get back on my bike.

At this point in the ride, groups thinned from 20 riders to four or five. Our group of four stayed together. We hit 100 miles less than one block before the finish line. After seven hours on the road, it was time for beer. Beer and cheeseburgers, to be specific.

It was a great day overall. Perfect weather. I may have underestimated the need for sunblock on my legs, but that’s how we learn, right?

I’ll definitely be back for the 2016 Fulton Gran Fondo. This was my first century and I spent it with a good group of dudes. We even met a few others on the way. Besides, when beer and biking are paired together, not much more convincing is needed.