Driftless is a region covering far SE Minnesota, SW Wisconsin and NE Iowa known for deep valleys, fast rivers and exposed limestone bluffs. It is an area untouched by glacial drift during the last ice age. If you travel there, you’ll find incredible scenery and some of the best trout fishing in the country. 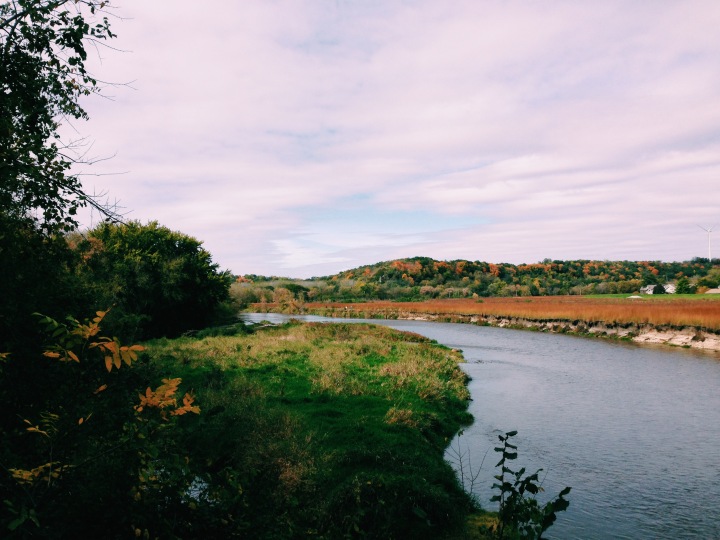 Decorah, Iowa lies on the western border of Driftless. Audra has a friend whose parents own a house in town and we made the 2.5-hour drive south from Minneapolis to explore the town and a weekend art fair. Ever-opportunistic, I stowed my fly rod in the back of my Subaru. “Just in case,” I muttered as I added the final touch of weekend gear to our meticulously packed cargo space.

Toppling Goliath Brewery also makes its home in Decorah; this was our safe place after we were all arted out Saturday afternoon. You can buy suds with names like Galactic Warrior, Naughty 90, Psuedo Sue and Golden Nugget IPA. “Did you get the Naughty 90?” asked a fellow patron as I took a seat with my beer flight. I looked at him, then down at my double beer flight, then back at him. “I got all the beers,” I replied with confidence. He gave me a nod, then walked off, presumably to rethink his life goals to reach those of mine. Needless to say, I have a new fan in Decorah.

What he didn’t know was that I split all eight samples with Audra and was only half the man he thought me to be.

Artist studios for the art fair were located in the downtown area to towns 30 miles away. Pieces ranged from watercolor to oils and sculpture to pottery. Saturday was spent at the downtown studios, while Sunday was spent at the off-the-grid studios. With my fly rod and dreams of trout grandeur in mind, I elected to stay in town and fish while the group explored the Sunday studios.

Without a bait shop in town, I relied on the Internet to help me find a place to fish. Unfortunately for me, AT&T doesn’t exist in Decorah, so my iPhone was bricked. A quick scan of the map yielded Trout Creek on the SE side of town. Hey, with trout in the name, it has to hold fish. Circling the town is an 11-mile bike trail loop known as Trout Run Trail. Another good fishing omen. I identified a parking area close to the creek on public land to enter the river. When you’re fishing in a new place without any insider information, public access is your best friend and worst enemy. It’s your friend because it allows you to enter the river. It’s your enemy because everyone can fish there, meaning the area can be fished out or the fish can be skittish–usually both. It was all I had, so that’s where I went. (I also only had one hour and didn’t bring waders, so this was my only option).

Upon arrival, a group of four men were walking back to their Suzuki hatchback with loud banter between them. With a keen ear and a penchant for eavesdropping, I learned they were two dads and their two sons. “We warmed the fish up for ya!” said one of the older men to me, as if to admit they caught nothing and welcome me to the area with the same seven words. “Did you make sure to leave the big ones for me?” I asked, testing the proverbial water. “Oh, they’re still there, alright” replied a younger guy in a serious tone. The defeat in his voice was strong.

Having only one hour, I was forced to fish quickly if I wanted to find the best water and fish it for as long as possible. Most of the river was lined with grassy banks teeming with green hoppers and wooly bear caterpillars. It was then decided that hopper was the fly of the day. With many fast spots, I tied a couple feet of tippet to the hook of the hopper and a nymph at the end of that. This allowed me to fish the calm spots on the surface via the hopper as well as the fast water, with the nymph doing the work and the hopper as the strike indicator.

I would cast four of five times in the fast water, then move on to the following slow spot and employ the same method. Nothing was rising and nothing was spotted in the fast water. I covered about a half mile until my 60 minutes was up. As per usual, I needed to get in one last cast. It landed right were I wanted it to, had a perfect drift, then snagged on a stick. Shit. Accustomed to wearing waders and boots, I took a half step before catching myself and remembering that I was just wearing Merrells and jeans today. But the hopper was RIGHT THERE, in four inches of fast water on the edge of a deep spot. I worked on wiggling it free. Nothing. That fly was $4.50. Yes, I spent more on a single pint of beer last week than I did on that terrestrial. But still. It’s about the principle. THIS RIVER WILL NOT DEFEAT ME. Shamelessly, I rolled up my jeans, walked into the river and freed my fly.

Slosh. Splat. Squish. Repeat. That was the half-mile walk back to my car.

I may have lost the fishing battle, but I won the weekend war. Decorah, you and I will be seeing each other again.