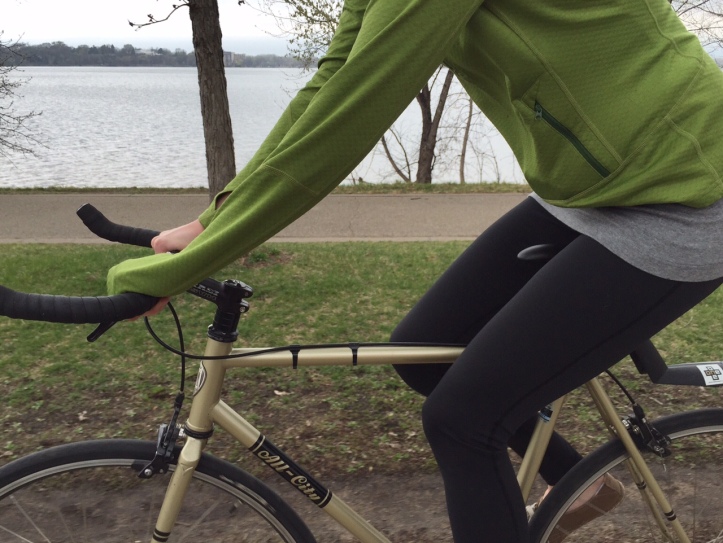 It’s been a fast year so far on the bike. Morning rides are spent sprinting to get to work on time (punctuality has never been a strong suit). Weekend rides are spent logging miles at a good pace to get in shape for the Fulton Gran Fondo. It isn’t often that I can get on a bike to relax.

A weekend morning of watching soccer quickly turned into a morning of cycling. Destination: Bogart’s Doughnuts. We were in no rush. I hopped on my Salsa El Mariachi SS 29er and Audra on her All-City Big Block. Bogart’s isn’t far from our place. They’ve got some of the best pastry in town and often sell out before the clock strikes noon, if not much sooner. We’d take our time. The sky was dreary and rain looked to be on its way. “No need to rush,” we told ourselves, “it’s all about the ride.”

Needless to say, we took too much time.

But where one opportunity is closed, another is open. Gigi’s Cafe is across the street. Looks like the day will include a full meal, rather than pastries, though there were no complaints of the latter. We went inside, enjoyed our scones and scrambles, and left to bike home in the rain.

**Disclaimer update: I just needed to clean sprinkles off of my keyboard. I’m not ashamed.

The rain never came. Clouds were dark and ominous and rain was definitely near. Still, the weather was nice enough for a ride. Gigi’s is on 36th and Bryant in south Minneapolis. Bryant is a bicycle boulevard and 36th just received a bike lane that leads to Lake Calhoun. With our house being just under one mile from Lake Harriet, we would take the long way home.

April has been a windy month. Seldom do you find yourself biking into anything other than a 30 mph headwind. On this day, wind was still and Calhoun was a pool of glass. We sat aside the lake on a park bench and watched the migratory waterfowl. Flocks of coots speckled with mergansers fished the lake on their way north. Mallards made themselves at home, as they’ve been here all year because of open water on the north side of the lake. A couple loons were spotted in deeper water. Their iconic call beckoned slow, lakeside days in warmer weather to come. But if summer takes its time to arrive, we won’t complain. No need to rush.